A structure fire was reported just minutes after midnight  Saturday morning on Banner Quaker Hill Rd. in Cascade Shores.   Fire units responded to the given location which was just at the base of the steep hill leading into the development.  Upon arrival Battalion Chief Joshua Sunde reported finding a 2 story wood frame residential home, with heavy smoke and fire showing, that was fully involved in flames.

The fire took approximately 1 hour to knockdown and an additional 2 hours to extinguish.

Battalion Chief Sunde says all operations were performed from the exterior of the building due to the amount of involvement and instability of the structure. There was minor extension to the wildland, and extension to multiple vehicles. All occupants were reported out of the building with the homeowners being transported to SNMH with minor injuries from jumping out of the second story to flee the fire. The residence and vehicles were a total loss. but there was No damage to adjacent properties. Neighbors reported hearing an explosion before the residence erupted in flames. but, The cause of the fire is still under investigation.
— 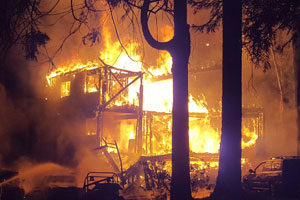