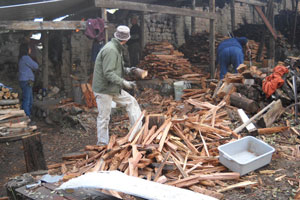 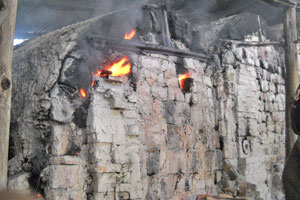 Participants call it  the “dragon-kiln” . There is an intense time of building fires in each chamber.   participants work in two hour shifts around the clock to stoke the fires.
The temperatures inside the chambers can reach  2,500 °F . The fires create ash that settles on the ceramic pieces during the firing. The interaction between flame, ash, and the minerals in the clay form a natural ash glaze.

The public is invited to come to the Woolman Sememster School to witness the firing of the step kiln Saturday evening October 26th from 7 to 9 pm.

click here to listen to Richard Hotchkiss
The Woolman Semester School community will be celebrating with Earth-Dance-Fire–a celebration of the Kiln Firing and Harvest Dance.  The Woolman school and the step kiln are located at 13075 Woolman Lane off of Jones Bar Road, just a few miles outside Nevada City.