Two fires that where about 100 ft. apart   were contained at less than one acre total size thanks to quick action by North San Juan Volunteer Fire Department and Camptonville VFD. The fires were reorted at 3 pm Saturday along HWY 49 between Petersons Corner and North San Juan.

The cause of the fire might have been a broken exhaust system from a car. The fire is testimony to the dry conditions already faced by firefighters. 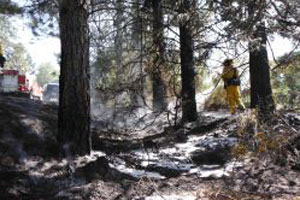 Christoffer Montelius, Engineer NSJ VFD says Firefighter David Jensen was one of the first ones on scene and, faced with heat and tree torching, he contained his flank of the fire very skillfully.

Montelius says We have very dry conditions right now and with a north wind coming midweek – with possible single-digit humidity levels – we all need to be heads up and aware.