Chips the bobcat, who was only four weeks old when she was rescued last August by U.S. Forest Service firefighter Tad Hair and his Mad River Hand hotshot crew, is now 8 months old and back in bobcat territory in Lassen County, Calif. 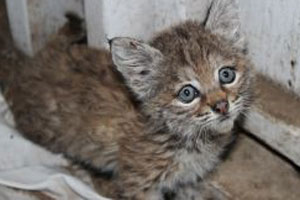 Because of early human handling to treat her second-degree burns, rescuers initially thought Chips acted a little too friendly towards humans raising concerns that she could not survive in the wild.

But after officials at Sierra Wildlife Rescue in Placerville, Calif., raised her and another cub exclusively with other bobcats, both were judged by experienced wildlife rehabilitation experts as ready to go out on their own. 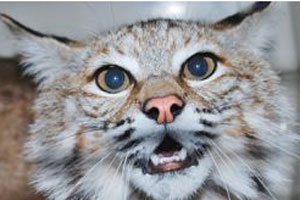 humans, emerging from her den only when no one was nearby. She continued to grow up eating, playing, wrestling and competing with her den mates, as a proper bobcat kitten should. Along with the others, she became very competent at chasing down her own food – live mice released in her den.

The Forest Service cautions all visitors to not interfere with nature. Leave injured animals, including young ones, alone. Often, an injured cub or other small animal has a mother nearby waiting for you to leave – or attack you if you don’t. So initially, Hair and his crew walked away from the bobcat after they found her in the aftermath of the Chips Fire. They didn’t find tracks for her mother, and they noticed her burn injuries including eyes she could barely open.

So the crew determined she would be rescued and named her Chips on the spot. She initially received treatment from Lake Tahoe Wildlife Care and then was transferred to Sierra Wildlife Rescue.

– Report injured wildlife to your state fish and wildlife department or the local sheriff’s office.

– You are responsible for your safety and the safety of those around you. Help keep wildlife “wild” by not approaching or feeding them.

– Alter your route so that you move away from animals without disturbing them. Do not block an animal’s line of travel.

– Also, be aware of safety tips when dealing with animals that will attack if provoked, such as bears and mountain lions.