28 More Pounds of Pot In Another Traffic Stop

Another large quantity of marijuana confiscated during a traffic stop in the Truckee area  Thursday afternoon. CHP Officer John McDonnell says that an 2014 Chevy Malibu was stopped for speeding on eastbound Highway 80 near the Donner Gate exit. The driver, 28 year old Jennette Griffith of Citrus Heights, turned out to be on searchable probation and had restricted driving privileges. According to Officer McDonnell, Griffith’s behavior and answers raised suspicions and the canine officer was called.
Click here to listen to Officer John McDonnell 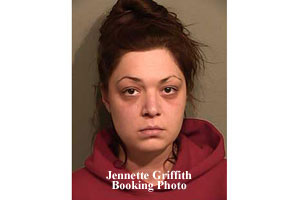 The 27 packages totaled almost 29 pounds of marijuana
Griffith was taken into custody for possession of more than one once of marijuana, possession of marijuana for sale, and transportation of marijuana along with multiple probation violations.
Wednesday 48 pounds of pot were confiscated in Truckee when the driver of a pickup truck pulling a fifth wheel trailer was pulled over for following the vehicle ahead of it too closely.