A second suspect in custody two weeks after a double shooting incident near Rex Reservoir in the area above Penn Valley The brother of suspect, James Carman was arrested On Friday, January 16, 2015. William Carman, was booked into the Wayne Brown Correctional Facility for the charge of attempted murder, subsequent to an arrest warrant. 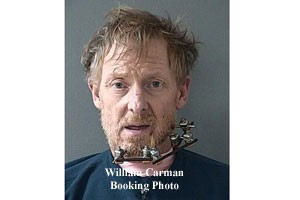 On January 3rd the two brothers apparently were in a confrontation that led to gun fire from both individuals injuring one of the brothers and a woman. James Carman was arrested later that night after a day long manhunt.

A suspect in a double shooting in Penn Valley is in custody following a day long man hunt. Early Friday morning a little before 6:00 AM deputies responded to two 911 calls of gunshot wounds involving a male and female near Rex Reservoir above Penn Valley. A suspect James Carmen, 61, was identified as the shooter.

Carmen was a parolee at large and considered armed and dangerous. Last night detectives caught a break.

Carman new that he was wanted by law enforcement.

Detectives were serving a search warrant at another location when Carman actually called the same residence.

The case is still under investigation and additional charges may be filed. Once the investigation is completed, it will be submitted to the District Attorney’s office for prosecution.