The winner of the Ultimate Hitch competition was David and Patsy Cunningham of Meadowlake Belgians, from Carlton, OR.

Audrey Popoff of Unhitched Ranch, from Colton, CA was recognized as the outstanding lady driver for the third year in a row, accumulating high points to win the Susan Parnell High Point Perpetual Award.

The Teamster of the Year Award was presented to Mike Lorenzini, an honor bestowed upon him by the voting of his fellow teamsters. Lorenzini is from Lakeport, CA.  The Andy Amsbaugh Teamster Award went to Rick Newborn of Top Hand Ranch, Elverta, CA; and Abby Partridge of Partridge Percherons, Galt, CA, won the Youth of the Show award.

The Champion Matched Pair went to Clydesdales Rambo and Ike, shown by Lawrence McGibbon and owned by Carlaw Clydes of Cranbrook, British Columbia.

A complete list of 2016 Draft Horse Classic awards, as well as all the Harvest Fair winners, is on the Nevada County Fairgrounds’ website at NevadaCountyFair.com.

The 2017 Draft Horse Classic is scheduled for September 21 – 24. Tickets will go on sale on May 1, 2017.  Visit NevadaCountyFair.com for more information. 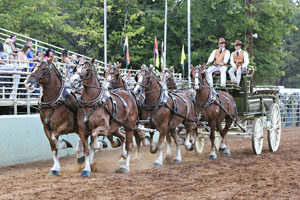