Department of Water Resources snow surveyors yesterday  confirmed that water content in the mountain snowpack is 66 percent of average, well below normal for the date.  The snowpack at the season’s first survey on January 2,  was 134 percent of normal for that date. Ted Thomas with the Department of Water Resources says the water content in the snow pack is the same, but it hasn’t continued to build as winter has deepened because of the continuing warm weather .  In other words,  the snowpack has not kept pace with the calendar. 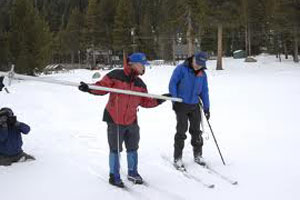 The snow pack, often called California’s “frozen reservoir “  normally provides about a third of the water for California’s farms and communities. Thomas says there is a storm system on the horizon that may bring more snow.

Thomas says one dry year or even two  does not put the state into dire straights.  It’s when there are  four even five consecutive dry years that the state has  really serious water shortage problems.