A suspect arrested after he refused to open a door for law enforcement. Nevada County Narcotics Task Force Officers were serving a warrant on a Grass Valley address Tuesday when, apparently, no one would answer the door. Nevada County Sheriff Keith Royal tells KNCO the officers took additional action .

Deputies also located surveillance equipment that was monitoring the front of the residence. 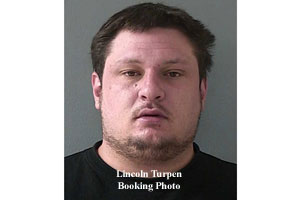 Turpen was detained and a subsequent search of the residence uncovered a weapon and a variety of drug related items.

Lincoln Turpen was taken into custody for the drug related charges, possession a controlled substance while armed, and possession of stolen goods.