At this point, CHP Officers say there is no indication that drugs and or alcohol contributed to a multi vehicle collision on hwy 49 Saturday that sent 8 people to various regional hospitals. CHP Officer Greg Tassone says the driver of a 2011 Toyota Tacoma and the driver of a 2011 Ford Expedition were traveling Northbound on SR-49, north of Cameo Drive where the two lanes merge into one lane.

Then both vehicles went out of control at high speed into the southbound lane where they collided with a Chevrolet Astro bus head on, causing major damage to all of the vehicles and major injuries.

Multiple ambulances and medical transport helicopters were called in.

The couple in the Toyota Tacoma are  23 year old Lindsay Fitzinger of Foresthill, and 25 year old Scott Tamietti of Rough and Ready,  and in  the Ford Expedition were 75 year old Joanna Hender of Grass Valley and a 14 year old female juvenile also from  Grass Valley.
— 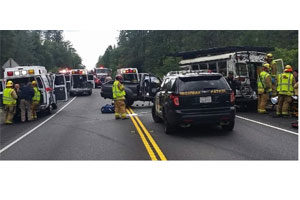