Nevada County Sheriff Deputies responding to a 911 call with no one on the other end of the line ended up finding a wanted felon and a number of illegal items. Sheriff Keith Royal says when officers arrived they immediately recognized 45 year old Eric Meyer as having warrants for his arrest. royal says that Meyer initially fled into the residence locking the door and when officers entered there was short scuffle with Meyer while he was detained. Officers also saw a large quantity of marijuana in the house so they obtained a search warrant. 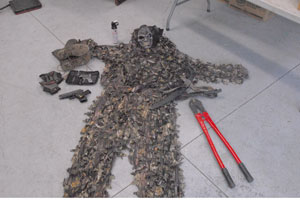 Hiding inside the residence the officers also found Meyer’s son, 20 year old Jacob, who had a warrant for his arrest.

Both Eric and Jacob Meyer were taken into custody for warrants. Eric Meyer was also charged with possession of a controlled substance and burglary tools. Interestingly enough Sheriff Royal says the marijuana in the residence may be stolen.

The sheriff is asking anyone who may have been a victim of Meyer’s to contact the Sheriff’s Office.