Memorial Park off of HWY 174 is a possible crime scene today after a body was found. Grass Police Officers with the help of the Department of Justice Crime scene investigators have Memorial Ave behind the baseball fields in the parking area in the back of the park marked with yellow caution tape as investigators collect evidence from the scene. Captain Rex Marks with the Grass Valley Police Department says the body is that of a female.

In a news release from the Police Department, the Preliminary investigation confirmed the finding of an unclothed body of a Caucasian female, approximately 45 to 55 years of age, having been discovered near a pair of dumpsters located in the general parking lot. Sgt Perry with the Grass Valley Police Department says officers arrived at the scene shortly after 7am this morning. How long the body was there is unknown at this time. Capt Marks asks if anyone has any information about this death to contact the Grass Valley police Department at 477-4600. 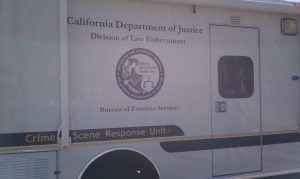