The 58th annual Nevada City Bicycle Classic included a full day of activities. Many of the activities on race day taking place under the sun on one of the hottest days of the year so far. Only three children, five year old Libby, three and half year old Ezra, and four and a half year old Levi arriving in time for the start of the Children’s Bicycle Parade. 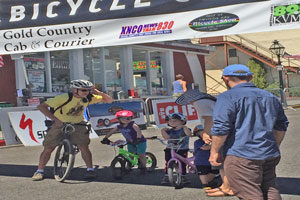 The children immediately infused with first aid ice cream following the downhill parade on Broad and Pine Streets. Apparently all of the other children melted in the 90 degree heat before they could get to the starting line. 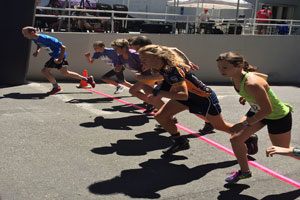 The parade was followed by a handful of runners competing in the Nevada City Mile… a one lap running race on the bicycle course. One young runner had a strategy.

Fun may have been the primary goal… surviving the nine-tenths of a mile footrace was also a goal.

Former Nevada City City Manager, Mark Prestwich, was in town for the run… surviving the nine-tenths- of a mile loop.

The parade and the run led up to a full day of bike races.