The wet weather added a challenge to the annual Mardi Gras parade, but the rain did not dampen many spirits in Nevada City. Chamber of Commerce Executive Director Cathy Whittlesey, said that even with the rain the parade is still a big event.
Click here to listen to Cathy Whittlesey

This year’s Grand Marshall, Sacramento newsman Walt Gray, was honored to be part of the Mardi Gras festivities and has a history of celebrating the Nevada City event.
Click here to listen to Walt Gray

Gray brought his family along for the carriage ride down Broad Street…and he also understands the spectators that were taking cover under overhangs and inside establishments along the route.
Click here to listen to Walt Gray 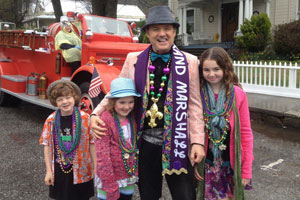 As for how the spectators were feeling as they watched the parade from the sidewalks.
Click to here Mardi Gras Parade Crowd 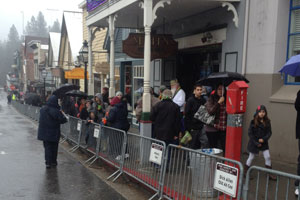 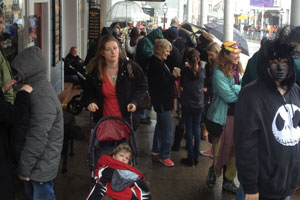 Whittlesey says that all of the Mardi Gras events have gone off without a hitch and everyone is having fun despite the weather.
Click here to listen to Cathy Whittlesey

The rain continued through the parade but spectators and participants alike still managed to have  a fun filled afternoon.

Paul---Thanks for braving the weather and getting the report !! Ed S