A male subject yelling profanities and being overly loud became aggressive when other people at Memorial Park asked him to quiet down. Grass Valley Police Lt. Alex Gammelgard tells KNCO that the subject was a middle aged man that was attempting to leave the park after hitting a man. 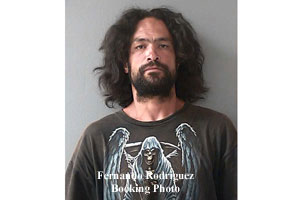 As the officers investigated the issues, it was determined that Rodriguez was the aggressor.

Rodriguez did not take kindly to the request to quite down.

The object was allegedly a beverage can of some sort.

Fernando Rodriguez was arrested and booked into the Wayne Brown Correctional Facility for Assault with a Deadly Weapon as well as vandalism of the car causing more than 400 dollars damage.

this is Fernando Rodriguez siSter ,I'm just here to speak on behalf of my brother even though he's not in his right mind like Nevada City knows he's not, I really wish that I can get him off parole and home to his mother ,sister, cousins, his nieces his whole family out here in Alameda County so we can get him the help he deserves and need to be Fernando Rodriguez again,

Hello Mrs. Ruiz my name is Dan Taliaferro and I went to school with Fernando's brother and sister Danny and Penny in Martinez and I know Fernando, I speak to him often up here in Grass Valley my e mail is dan@knco.com let me know if I can help.