The man wanted in connection with the assault of Mary Grace Tassone at St. Patricks Curch last Sunday has been taken into custody. At approximately 8:30PM last evening a citizen called law enforcement to report that she was looking at the Honda Accord being sought in connection with the attack parked in the K-Mart parking lot located on McKnight Way in Grass Valley. She even confirmed the license plate number by checking it with a post on Facebook.

click to listen to Lt. Gammelgard
An arrest warrant had been issued Monday for 50 year old Allan Kierkegaard, . for attempted murder and carjacking in connection with the attack of 78-year-old Mary Grace Tassone, a volunteer at St. Patrick Catholic Church, 235 Chapel St. Tassone was found near the side of the church, which she opens for services and prepares for masses, at about 7:30 a.m. Sunday. She sustained head trauma in the attack and was taken to Sutter Roseville Medical Center, where she underwent surgery.

GVPD has been in contact with the Tassone family who extends their warmest and heartfelt appreciation to the community for their support and vigilance in locating the suspect in this case. 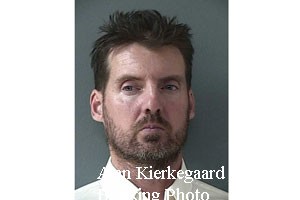 If he doesn't spend the rest of his life in prison, then our judicial system is a joke.