What started as social drinking at a local bar in the Lake of The Pines area on Saturday ended with a sexual assault at a residence within Lake of the Pines. According to Sheriff”s Lieutenant Steve Tripp, the reporting party, was male that had received some distressed texts.
Click here to listen to Lt Steve Tripp

A that point phone went dead and the reporting party attempted to physically locate his wife after calling the Sheriff’s Office. Dispatch was able to contact the victim and she stated that she was on her way home. Deputies made contact with the victim at her home. She was obviously upset.
Click here to listen to Lt Steve Tripp

Apparently the victim had been drinking with the suspect, Dallas Myers age 37, at a bar outside of Lake of The Pines and then moved to the suspects residence where she was trying to give Myers relationship advice regarding a situation in which he was involved. While they were talking Myers began complimenting the victim and eventually sexually assaulted her while she resisted.
Click here to listen to Lt Steve Tripp 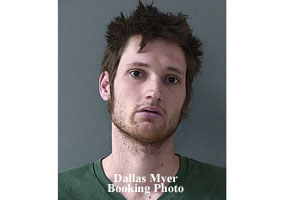 Dallas Myers was booked into the Wayne Brown Correctional Facility for sexual assault and is being held on 100,000 dollars bail.