In a surprise turn of events, the shoulder tap operation focused on alcohol being purchased for or sold to minors captured a suspected drug dealer in the Truckee area. According to Sheriff Keith Royal, one of the decoys in front of the SaveMart on Deerfield Drive approached an individual and asked him if he would buy some alcohol for him. The decoy was given an answer he didn’t expect.
Click here to listen Sheriff Keith Royal

However, undercover sheriff’s officers were in position to hear the conversation, so a second undercover officer then approached the subject, later identified as a Maverick Fitzgerald, and asked if he had anything to sell.
Click here to listen Sheriff Keith Royal 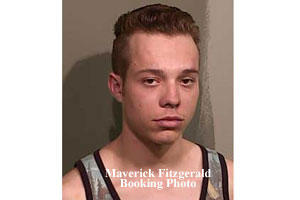 So the officer said he wanted to buy some cocaine.
Click here to listen Sheriff Keith Royal

Officers moved in on Fitzgerald and took him into custody following a a struggle in which they had to take the suspect to the ground prior to handcuffing him. Fitzgerald was booked on a variety of drug related charges along with willfully resisting arrest.