This year’s Constitution Day Parade in Nevada City was not only the 50th event, but it also officially welcomed home Alexander Rossi, winner of the 100th running of the Indianapolis 500. Special events for Rossi got started Saturday Night with a dinner reception at the gold Miners Inn where Grass Valley City Council presented Rossi with a key to the city. Rossi says he was also looking forward to the weekend ahead.

During the evening Alexander’s Father and race manager Peter Rossi talked about the journey of his young son winning soap box derby races to eventually getting an invitation to race in the Indy 500. Alexander says he was appreciative of the turnout at the reception.

click to listen to Alexander Rossi
As for the future Rossi says he has a goal.

The GoPro Grand Prix of Sonoma is Sunday September 18th at Sonoma Raceway. Riebes AutoParts has put together bus and ticket packages for locals to see the race. Details are on the website www.sonomaraceway.com. 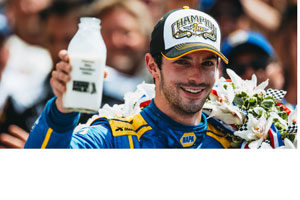