A local man is being sought for questioning for inflicting injury to a older family member. Nevada County Sheriff Keith Royal says deputies went to Sierra Nevada Hospital to a report of a 76 year old man being injured by his son. The report says 46 year old Christopher McCoy became upset and started throwing items around the Newtown Road home he was staying at, Monday night. The Sheriff says when the 76 year old victim approached McCoy, the victim was pushed to the ground.
Click here to listen to Sheriff Keith Royal 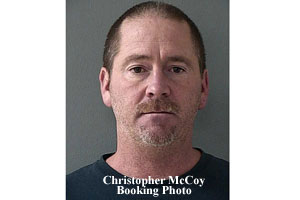 The victim suffered as fractured wrist in the incident. The Sheriff says Deputies could not locate McCoy after the incident. Investigators are working on the case as elder abuse and assault with serious bodily injury. Anyone with information on McCoy’s whereabouts to contact is office at 265-7880.

In the second incident, two teenage brothers were taken into custody after their mother said they were out of control. Nevada County Sheriff Keith Royal says deputies went to a home in Lake of the Pines Sunday afternoon. The mother reported she had been threatened by her two sons after she told them to clean their room. The two sons ages 16 and 14, had barricaded themselves behind the bedroom door. One of the brothers had several violent situations in his past and was on probation. The Sheriff says the deputy tried to speak with the boys.
Click here to listen to Sheriff Keith Royal

The mother was tired of being threatened by the boys finally to the Deputy to take the door down, which he did. Both boys were taken into custody and booked into juvenile hall.

In a third incident,  a call of a man holding his family hostage over the weekend had Sheriff’s Deputies prepared for the worst. Nevada County Sheriff Keith Royal says Deputies were called to the Grizzly Hill Road home on Friday night. Sheriff Royal says the caller said The suspect was armed and threatening his family. The Sheriff says when deputies arrived the suspect was standing in his own yard.
Click here to listen to Sheriff Keith Royal

No evidence was found to indicate there had ever been a hostage situation. The home owner was booked into the Wayne Brown Correctional facility on the felony warrant.