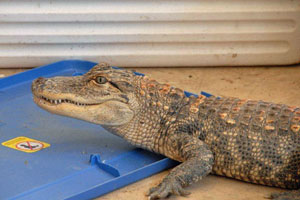 Karnow,  who says the alligator was about  4 and a half feet long.  Karnow and his boss, Lt. John Lawson of California Fish and Wildlife gathered a lasso and some special tools to capture the alligator.
Click here to listen to Jerry Karnow

They were able to tape the alligators jaw and legs and safely remove it to the department’s wildlife lab.  It was identified as an American Alligator which is native to the south east and not to California. Karnow says it is a violation to own an alligator without a permit and to transport one across state lines.
The alligator was found in the residence of 36 year old Joshua Kerley  whom  deputies had arrested June 3rd following  a domestic violence call .  Deputies returned to the residence the following day with a search warrant and found illegal assault weapons, ammunition,  and the alligator.