Photo Credit:Wes Schultz  During the first community meeting for the American Fire last night in Foresthill, Tahoe National Forest Supervisor Tom Quinn answered a question   that has been on everybody’s mind. What caused this blaze?  Quinn said the fire  is likely to be human-caused. There is an ongoing origin-cause investigation. He said they know that a late-model pickup was seen in the vicinity and it has been burnt over.  also   there were two gentlemen in the area, looking for a ride into town. They were given a ride into town and were interviewed by Forest Service investigators.” Quinn said that no charges have been filed and no arrests have been made. He stressed that the investigation is ongoing, explaining “Even if the fire is human-caused, there’s a difference between arson and stupidity.”
As for firefighting efforts, Fire Information Officer Peter Franzen says  the cloud cover and reduced  temperatures that lessened fire behavior allowed firefighters to complete   the portion of fire line that had advanced into the North Fork American River drainage.

Franzen says   The southern portion of the fire, closer to Foresthill and Michigan Bluff, is the next area of special focus for the team.

the American fire as of 9pm Monday August 19 was  at  just under 15 thousand acres in size with 54 percent contained. Incident commanders   are listing a projected full containment date of September 1st. 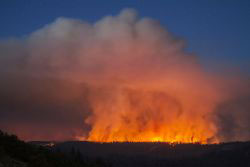