An Evening of Employee Celebrations at City Hall 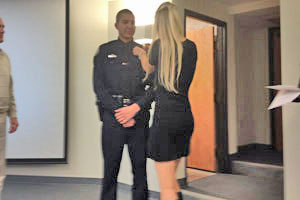 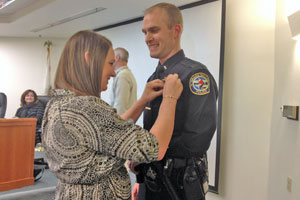 The second honoree was officer Alex Gammelgard as he was promoted from Sergeant to Lieutenant. First Mayor Dan Miller recognized all three candidates that competed for the position, Sgt Steve Johnson, Sgt Joe Matteoni, and Gammelgard.
Click here to listen to Mayor Dan Miller

Gammelgard humbly accepted the position and thanked his fellow officers, the council, and Chief Foster. His wife Erica pinned his lieutenant’s badge on his uniform. Gammelgard reflected on the people that have influenced him in his career- especially his father who, unfortunately, was killed in an automobile accident several years ago.
Click here to listen to Lt. Alex Gammelgard

Lt. Gammelgard is excited about taking on the challenges of his new position. 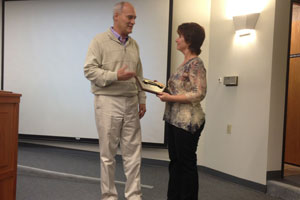 The third employee to be honored was retiring from City Hall after 29 years. . Mayor Miller presented Robin Smith with a special plaque and praise in recognition of her commitment to the city and people of Grass Valley.