A man who was out with friends at a Grass Valley establishment decided to punch out a car window while walking to a friend’s house. As a result of that action, the woman that was with him decided she did not want to go home with him. However, that did not keep the man from making his way to her house. Sheriff Captain Jeff Pettitt says, shortly after the victim got home the suspect David Pierce arrived. 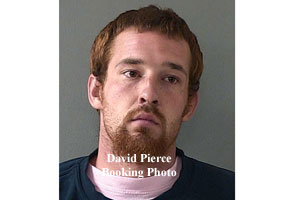 Responding deputies located Pierce walking down the street away from the house. Deputies took the suspect into custody and he was booked on domestic violence, 2nd degree burglary, forcible entry into the house, and vandalism greater than 400 dollars.