A Grass Valley man has been arrested for breaking into an occupied home and two nearby vehicles. It happened overnight Wednesday night on Ridge Road, according to Police Lieutenant Steve Johnson….

Johnson says among the items taken were an assault-style rifle, a semi-automatic handgun, two shotguns, a hunting rifle, and a lot of ammunition. He says officers soon after went to a home on Upper Slate Creek Road where the suspect lived, 22-year-old Eric Geisic. Family members told them that Geisick was last seen in the garage…

Johnson says numerous announcements were made over a loud P-A system that a CHP K-9 dog would be used if no one came out. After getting no response, the dog was used to subdue and arrest Geisick. All the weapons and ammunition were found under the house and all other items taken were also recovered. Geisick was on parole for a previous burglary and was also wanted on a parole violation. 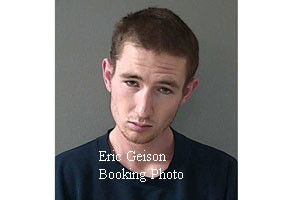 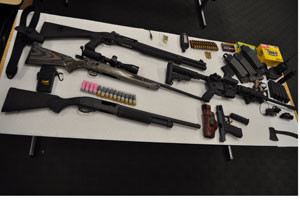