Auburn Police solve the case of the stolen meat.

Sometime between October 4th and October 8th, two subjects gained access to the Auburn Salvation Army food freezer and took over 300 pounds of packaged meat from the freezer. The meat is valued at 5000 dollars. The food is provided to help feed the homeless and needy families in the Auburn. 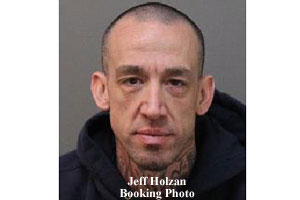 During this ongoing investigation, Auburn Police detectives located one of the persons responsible for the theft of the meat. Detectives arrested Jeff Holzman, 41 years of age, for violations of burglary, being a felon in possession of a loaded firearm in a motor vehicle, and for a violation of his Post Release Community Supervision conditions.

This investigation is ongoing and anyone with additional information is encouraged to contact the Auburn Police Department.