A citizen called the Nevada County Sheriff’s office about 7:30 last night trying to report possible domestic violence incident that was happening in his neighborhood off of East Drive and Rough and Ready Highway. Nevada County Sheriff’s Lt. Bill Smethers says the man reported he saw a dark colored Saturn 4 door vehicle traveling down the roadway, turn around and come back up.

The neighbor tried to take pictures of the vehicle and try to get the license plate but at that point the male driver took off at a high rate of speed.  Neighbors then came to the woman’s aid. 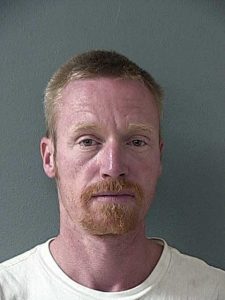 Deputies located the residence and contacted the suspect, 37 year-old Justin Michael Rose.  He had two felony out-of-county warrants for his arrest and he was taken into custody at that point.   Rose was also charged with the domestic violence.  An area check was made for the stolen Saturn and it was eventually located off of  Bitney Springs Road.  Deputies later confirmed the vehicle had been stolen out of the Sacramento area and added vehicle theft to Rose’s charges.