There are opinions for and against the medicinal properties of marijuana. Americans for Safe Access- Nevada County is trying to spread the word about the positive benefits of cannabis. ASA-NC has leased a billboard on highway 49 just south of Grass Valley.
Click here to listen to Patricia Smith

ASA-NC Chairperson Patricia Smith says the message on the billboard will change every few months.
Click here to listen to Patricia Smith

Smith sasy the next ASA hosted screening of “What If Cannabis Cures Cancer’ is scheduled for April 13 at the Truckee Recreation Center and another is in the works for Alta Sierra in May. 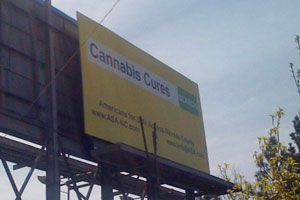 ASA-NC will also use the billboard to encourage support of a marijuana initiative that the group is planning to get on the ballot in an upcoming election to repeal the current Nevada County Marijuana Ordinance.

In other ASA-NC news- The NSJ Meeting date has been changed to this  SATURDAY in observance of Easter Sunday.

Agenda Items include:  Major updates on Ordinance and Initiative, New Events Announcements, and a Raffle