A fight over a flashlight led to a head injury and an arrest. Grass Valley Police say a 64 year-old man had loaned his flashlight to 50 year-old Roy Warren several days ago. Sergeant Steve Johnson says the two men had agreed to meet at a cul de sac on Berryhill Drive yesterday so that Warren could return the flashlight. When the victim arrived at the agreed upon spot, Warren was waiting for him.
Click here to listen to Sgt. Steve Johnson 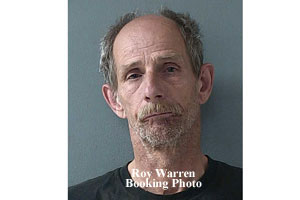 However, while stepping back to avoid the branch, the victim stumbled over a curb and slammed his head into the pavement. At that time Warren fled the scene on foot, but was located a short time later in the area of South Auburn and Berryman Street.
Click here to listen to Sgt. Steve Johnson

The victim’s head would was treated at the scene by medical personnel. He is expected to be ok.