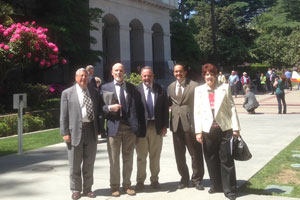 Supervisor Weston praised Assembly members Richard Bloom and Richard Gordon for their individual support to protect one of Nevada County’s most important historic assets.  Supervisor Weston stated, “We are grateful for both the Senate and Assembly Budget Sub-committee’s commitment to fund the restoration of the Bridgeport Covered Bridge.”

Today’s vote of the Assembly Budget Sub-Committee followed the Governor’s Budget proposal and the State Senate Budget Sub-committee’s vote that was held last month.  Caleb Dardick, Executive Director of SYRCL stated, “We are so pleased that the recommendation to restore and reopen the bridge is moving forward smoothly and we look forward to the budget being approved by the governor and work beginning as soon as possible.”

Phase 1 of the project is funded, scheduled to take place in 2014, and should provide basic stabilization work to protect the span from a catastrophic failure.    Today’s vote will recommend accelerated funding for this project if the technical design plan and all associated permits are completed.  It could be shovel-ready well in time for the 2015-2016 Budget and access to dedicated funding for this project is key. Robert Bergman applauded the committee’s decision, having shown them a photo of the bridge when it was damaged during the last floods, saying, “this Bridge needs to be protected now because once it’s lost, it’s lost forever”.

David Anderson of SYRPA thanked the entire community for their grassroots support that led to this success.  Supervisor Weston recognized the success of the joint advocacy with the City of Grass Valley, Nevada City, Truckee, SYRCL, SYRPA and the community, “We carried out the community’s wishes to save the Bridgeport covered bridge”.

All eyes will be on the Governor to follow the Senate and Assembly committee recommendations in his May Revise; which would then need to be approved by the Legislature.