A man attempting to steal a chainsaw from K-Mart has been caught, after a confrontation with the store’s loss prevention officer. At that point , 49 year old Jean-Pierre Dion dropped the chainsaw and fled the building– running to a suspected getaway vehicle. Grass Valley Police Sergeant Steve Johnson says that the store employee identified the vehicle to a police officer that happened to be in the parking lot.
Click here to listen to Sgt Steve Johnson 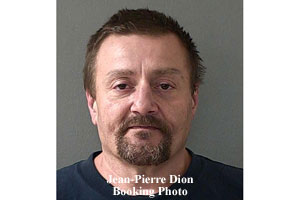 Johnson says the officer was able to stop the Cadillac as it was preparing to turn onto Highway 49 at McKnight Way.
Click here to listen to Sgt Steve Johnson

Dion gave an interesting explanation for his behavior in the store.
Click here to listen to Sgt Steve Johnson

Dion was arrested for suspected second degree burglary. His wife and mother were released as it was not determined they were aware of Dion’s action or intent when he entered the store.