An Auburn business has been burglarized three times in recent weeks and a lifelong collector’s life has been ruined as a result.
On January 8, 2013, March 18, 2013, and April 4, 2013 unknown suspects forced entry into Sirius Stamps and Treasures located at 816 Lincoln Way. The suspects took several collectible items during each burglary.
Click here to listen to Owner Sid Raich

Owner Sid Raich says in a past attempt the burglars tried unsuccessfully to take a 1000 pound safe that Raich said had personal items. However, in a more recent attempt they did get the safe.
Click here to listen to Owner Sid Raich

Raich says the most recent burglary cleaned out most of of his collectible coins, and with that his retirement.
Click here to listen to Owner Sid Raich

Raich estimates that 80,000 dollars worth of collectibles has been stolen from the business over the past several weeks. Several years ago thieves got away with gold and silver bullion worth 150,000 dollars in today’s market.

Auburn Police Officers say a dark colored, full size, king cab truck can be seen near the business during each of the burglaries and may be associated with the crimes. There is picture on KNCO.com 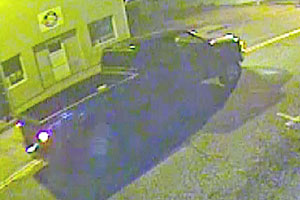 Auburn Police Detectives are continuing with this investigation.

If anyone can identify this vehicle or has any information regarding these incidents or stolenitems please call the Auburn Police Department at (530) 823-4234.