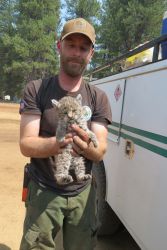 While conducting patrol and mop-up operations on the north end of the Chips Fire, Saturday, August 25th, the Mad River Hand Crew encountered a  baby bobcat. It was found wandering along the side of the road, alone and dazed. “It seemed to be confused” stated Tad Hair, the Mad River Hand Crew Superintendent who spotted the kit. According to Hair, it was the size of a domestic kitten and seemed to have impaired vision, perhaps from the smoke and ash in its eyes. “It was walking in circles near a stump” said Hair. Once they verified that there were no obvious physical injuries on the kit the crew attempted to walk away, but she swiftly followed the sounds of their movements. Each time the crew would stop, she would curl up on Hair’s boots, snuggling into his chaps.

Hair and his crew members searched a large area, but there were “no tracks, whatsoever, in the ash except for this little gal’s” and they found no sign of a mother bobcat. The lone kit, so young that its eyes appeared to be just starting to open, seemed abandoned and lost in the aftermath of the Chips Fire. According to the National Geographic, bobcats live a solitary life and the females will typically choose a den that is secluded in order to raise one to six kits, teaching them to hunt for up to twelve months before leaving them to survive on their own.

“I couldn’t just leave him there,” said Hair, who chose to name the kit “Chips” after the fire on which she was found. After contacting Fire Communications, Hair brought Chips to the Incident Command Post to await contact with appropriate parties. Charles “Buzz” Smith, Incident Communications Manager, contacted the Plumas County Sheriff’s Office, and the Department of Fish and Game. It was suggested that he contact Lake Tahoe Wildlife Care (LTWC).

Lake Tahoe Wildlife Care is a non-profit organization, run by volunteers, “whose function is to raise, rehabilitate and release orphaned and injured wild birds and animals.” The organization is operated under permits authorized by the U.S. Department of Interior and Wildlife Services, as well as California Fish and Game. There are no fees associated with the acceptance and care of animals, “nor is any animal refused care” according to Lake Tahoe Wildlife Care. 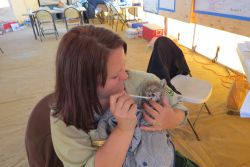 A call was made to LTWC and while awaiting their arrival, the Public Information staff cared for Chips, giving her a couple of ice chips and enormous amounts of tender loving care. Within 45 minutes of calling the number on their website, Anna Thompson, a Professor of Biology at Feather River College and a volunteer for LTWC responded to the Chips Fire Incident Command Post, along with her family. They, along with Public Information staff, fed Chips a few pipettes full of a special kit formula called K.M.R. which she eagerly devoured! Responding well to the formula, Chips was energetic and curious as they placed her carefully into a carrier.

Ready for transport, Thompson assured the Public Information staff that Chips was in good hands! They transported Chips to a fire fighter, who transported Chips the rest of the way to LTWC, where professionals, experienced in the care of bobcats, examined her and treated her injuries. The Executive Director and Co-Founder of Lake Tahoe Wildlife Care, Cheryl Millham, said today that Chips is doing “just great!” Per Millham, the fire fighter who helped to transport Chips flushed her eyes while en route to the shelter. Once she arrived at the shelter, a veterinarian took over, flushing her eyes again and added medicated ointment which is reapplied three times a day. “We are optimistic that once the infection is clear, Chips will regain full vision in both eyes” said Millham. She further explained that Chips had second degree burns on all of her paws, so the veterinarian cleaned off the dead tissue and carefully treated and wrapped her tender paws. Until her feet are fully healed she rests on a very soft bed, and is fed up to six pulverized mice per day, plus additional K.M.R. formula, if the mice do not sate her appetite. According to Millham, to keep Chips’ paws dry during the healing process, they give her a “spit bath” after each feeding, consisting of a moist warm cloth which they use to gently rub her fur while she eats, then she contentedly returns to sleep.

The next step in the process, says Millhap, is to ensure that Chips is exposed to other bobcats in order to learn appropriate behaviors. “Because she is so very young, she will be sheltered throughout the winter, along with other bobcats”. When the staff deems it appropriate, Chips will be released back into the wild, in an area where it is determined that food sources are abundant. When advised of Chips’ well being, Hair said he was grateful, and “would love to be involved in her eventual re-introduction into the wild, whenever that may be.” Chips will forever weigh on the hearts of those whose lives she touched during the Chips Fire.