Five activists who were convicted last month of trespassing onto Beale Air Force Base in an anti-drone protest were sentenced on Monday, September 9, to ten hours each of community service.   The federal trial and sentencing were held in U.S. District Court in Sacramento.  U.S. Judge Carolyn K. Delaney stated that the defendants had been by conscience and by “deeply held ethical and religious beliefs.”  She could have imposed up to six months in jail, a $5,000 fine, and/or five years probation.

Osgood says the group was hoping to avoid the probation terms, but Judge Delaney felt it should be in place for accountability purposes. The Judge did allow the defendants to address the court before sentencing.
Click here to listen to Shirley Osgood 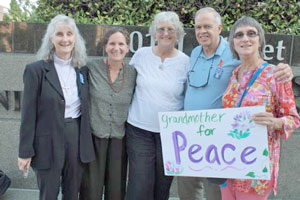 Along with Osgood, Janie Kesselman, Sharon Delgado, David Hartsough, and Jan Hartsough had engaged in civil disobedience by crossing a line onto Beale Air Force Base last October during a demonstration against the U.S. drone warfare program.  Osgood did say that she and the others will continue to protest. Global Hawk surveillance drones, based at Beale, assist in finding targets for weaponized drones.