The two schools continued to dominate the agriculture mechanics contest in what is turning out to be a record setting year.  Bear River took first place in the contest and was followed closely by Nevada Union who took second. Alex Nelson from BRHS was 1st High Individual, Sam Stone from BRHS was 2nd High Individual, Cody Butterfield from NU was 3rd High individual and Wyatt Price from NU was 5th High. “This contest is one of the most difficult contest students can compete in, these students are working really hard and it’s paying off.” said Tim Reid Bear River agriculture mechanics instructor.  The contest is divided into seven sub contests.  Nevada Union placed first as a team in the area of woodworking and electrical while Bear River placed first in Gas Welding and Surveying and Plan Interpretation and both teams had high individuals in many of the sub contests.  “It is a fun time to be a student at Bear River or Nevada Union.  Our students are sweeping the agriculture mechanics contests and proving to be dominant forces in every other contest we enter” said Luke Browning Agriculture Mechanics Instructor at Nevada Union. 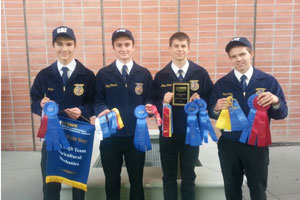