Community members  turned out  en mass  to support the concerns of the San Juan Ridge Taxpayers Association   and the South Yuba River Citizens League   regarding the proposed North San Juan mine project. Members of both organizations and concerned citizens gathered outside the Rood Center and then filed into the board chamber to present 1,300 postcards to the supervisors. 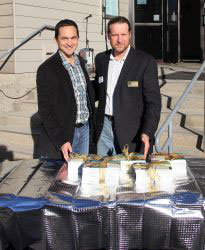 The postcards, collected during SYRCL’s recent Wild & Scenic Film Festival, state “water is more precious than gold” and feature an image of the mythological King Midas, who wished for the ability to turn anything he touched into gold but later regretted his decision after turning food, water and even his own daughter into the precious metal.

At this point the proposed opening of the North San Juan Mine is under a full Environmental Impact Review and SYRCL Executive Director Caleb Dardick says everyone is waiting for that to come out, probably this spring.
click here to listen to Caleb Dardick

About 1,000 parcels are in the vicinity of the San Juan Ridge Mine. The gold mine closed down in the 1990’s after drilling drained an area aquifer, causing twelve wells to fail, including those of Grizzly Hill School and North Columbia Schoolhouse Cultural Center.   Owners of the mine are now seeking to re-open the mine.

Here are the statements presented at Public Comment to the Board of Supervisors this morning.

San Juan Ridge Taxpayers Association  Vice-President Kurt Lorenz spoke on behalf of his organization,  stating: “The fate of my community and the fate of the San Juan mine are not before you today, but will be soon. In 1993-94, I was part of the team that negotiated a community protection with Siskon. It didn’t work! We know what we’re up against. We can’t go there again. We can’t allow 3.5 million gallons of water per day to be used. We can’t allow the destruction of property values for hundreds of families to export wealth from Nevada County to outside investors. We can’t allow the loss of 200 existing jobs for some 75 speculative, temporary jobs.”

Lorenz continued: “This will be one of the most important public policy and land use choices in Nevada County for at least a decade. It’s our community now, your community is next. I’ll leave you today with an appeal. This is a private property issue of huge import and it is ultimately very simple. The mine owns private property, this is not public land, we understand that. So do we. The mine’s right to affect our property stops at their property line! Because that’s not how groundwater works and we cannot allow this mine to reopen. Thank you for hearing us today.”

Next up was SYRCL Board President Barbara Getz. “Good morning to all of you and thank you Chairman Beason for the opportunity to speak this morning.

My name is Barbara Getz. I am here this morning representing SYRCL the South Yuba River Citizens League. I have served on the SYRCL board for many years and I am currently SYRCL’s board president. I have lived on the San Juan Ridge for 43 years. In addition, I am a longtime Nevada County business owner and concerned citizen.

This year at SYRCL’s 12th annual Wild & Scenic Film Festival volunteers collected over 1300 signed postcards from festival goers expressing their concern that reopening the San Juan Ridge Mine may threaten the Yuba River watershed. The postcard shows an image of King Midas, who foolishly asks the gods for the power to turn anything he touches into gold – with disastrous consequences for himself –as everything he touches, including food and his own daughter, are turned into the metal. The postcard states that “water is more precious than gold.” Especially in this time of drought we can all certainly agree that our water resources must be protected.

SYRCL is very concerned that the mine could pose risks to the South Yuba watershed and its tributaries, Spring and Shady Creeks, including impacts to water quality and quantity, fish and wildlife, and vegetation.

We commend you, our Board of Supervisors, for requiring a full EIR for this proposed project. As these postcards attest the community is very concerned and we all will be paying close attention to the EIR and the potential impacts it could expose. SYRCL is committed to the environmental review process for this proposed project. From all indications, the County and its consultants are working hard to evaluate past impacts as well as prospective ones. We look forward to seeing the analysis.

We request your leadership in protecting the South Yuba River watershed from the proposed reopening of the gold mine on the San Juan Ridge.

Thank you for your time and we would now like to present the postcards to you.”

Supervisors thanked the public for attending and then proceeded with the rest of their regular agenda.