Fairgrounds CEO, Sandy Woods says Bill Schultz, who passed away in 2013, was a long-time resident of Nevada County and had a tremendous love for the Fair.*

The second inductee, William Wetherall, served on the Fair’s Board of Directors for approximately 15 years, commencing in May 1962. In addition to his work with the Fair, William was the Dean of the Nevada County Bar, and he practiced law until his late 80’s. William passed away in 2013 at the age of 102.*

The third inductee, Rose Thompson, has been an active participate at the Fair for the past 44 years, where she has been exhibitor, an employee, and a volunteer.

Prior to moving to Grass Valley 44 years ago, Rose had never been to a Fair; however, upon her first year in Grass Valley, she volunteered to set up a display at the Fair, got “hooked on the Fair,” and has been at every Fair since!
Rose has also been a member of the Pioneer Arts Club for more than 20 years, and also works with the Quilt Guild. 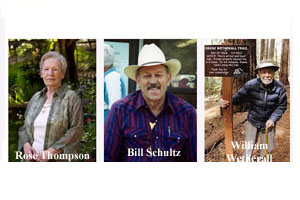 Schultz, Wetherall, and Thompson will be formally inducted into the Hall of Fame at opening day ceremonies on Wednesday, August 6 beginning at 8:30 AM. The honorees will receive a portrait donated by Shaffers Originals of Grass Valley.
The 2014 Nevada County Fair is August 6 – 10