The rain in December caused some delays in the Bridgeport Covered Bridge project, but Chairman of the Save Our Bridge Campaign, Doug Moon says they are getting back on track. Last week they put up scaffolding beneath the bridge and this week they will be installing the metal cradle that will actually hold the bridge and keep it in place so there’s no further damage.

Moon says the Bridgeport Covered Bridge is a truss and an arched bridge which may be how it has survived so far. It is the longest single span wood covered bridge in the world which is why they want to restore it. Moon says Steel rods throughout the bridge were used to adjust the span and keep it straigt, but they no longer function.

Being a National Landmark and a historic structure, Moon says the restoration must be back to the way the bridge originally was,

click here to listen to Doug Moon
The ironwork to support the bridge during construction is going to be trucked in this week and Moon says the park will be closed for that day, probably this Friday. (1/30) Full restoration and reopening of the Bridgeport Covered Bridge is slated for 2018. 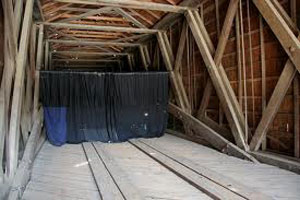