A male suspect wanting a little more than conversation with a young woman ended up going to jail after a struggle Friday afternoon. When deputies arrived near the area they found the female victim waiting in her car. She was covered with blood, her face was swollen, and her clothes were in disarray. Deputies, concerned for the victims well being, were told by the victim that the blood was not hers. Sheriff Keith Royal says the victim had fought with a male suspect, later identified as 54 year old Kevin Pratt.
Click here to listen to Sheriff Keith Royal 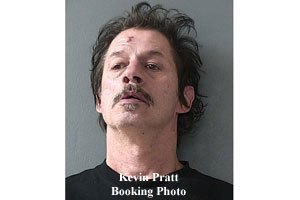 Pratt continued to struggle with the victim covering her with blood, stretching her shirt and forcing her to the ground causing her to strike her head. Fortunately other people in the house heard the struggle and intervened taking the knife away from Pratt and the victim allowing her to leave the house and drive to the spot where she met the deputies.
Click here to listen to Sheriff Keith Royal

Pratt was charged with domestic violence and making criminal threats as well as having two warrants for his arrest.