BSM Triathlon Cancelled Due to Smoke

The Smoke from the King Fire prompted officials with the Barbara Schmitt Millar Triathlon to cancel the event yesterday morning. Director Nancy Avilla said it was a difficult decision but she felt it was  the right one.

A few minutes before they decided to cancel the event, Avilla says a large  Fir Tree came crashing down near the boat ramp. 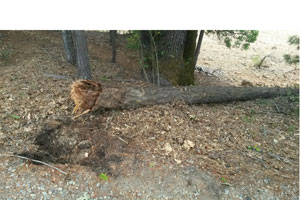 Kelly Holderfield came from Colfax to compete in the triathlon, but when the announcement came that they were cancelling the event,  she thought it was the right call.

Some 380 athletes were registered to participate in the event. Avilla says they will not be able to reschedule the triathlon this year.
click here to listen to Nancy Avilla
The Barbara Schmitt Millar Triathlon typically raises  $28,000 to $32,000 a year for the breast imaging center at Sierra Nevada Memorial Hospital to offer women free mammograms and also to fund scholarships for youth going into the health care field.