A suspect posing as a filtration system company employee took advantage of an elderly woman and stole a number of items from her Grass Valley residence. Grass Valley Police Sgt Steve Johnson says that the suspect knocked on the door of the woman’s house identified himself as an employee of a legitimate company and explained he was there to service her water filters.
Click here to listen to Sgt Steve Johnson

Unfortunately the woman allowed him access, but did begin to follow him around. At one point she noticed some jewelery missing from a bedroom and confronted him asking for his business card. He did not have a card, denied taking any jewelery, and quickly left the house. Sgt Johnson says the woman called the filter company and learned the visit was not a real service call.
Click here to listen to Sgt Steve Johnson 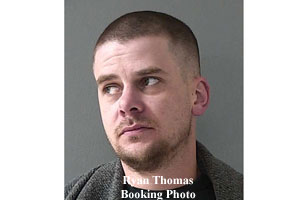 Thomas, had gotten away with several gold medallions, a gold bracelet, and multiple gold necklaces. Police continued their investigation and caught a break just after 5 PM.
Click here to listen to Sgt Steve Johnson

The remainder of her jewelery was located within his apartment. Police were also working to get the jewelery that was sold back to the victim. Sgt Johnson says this is another reminder to not let people into your home that you do not know. It is appropriate to ask for identification of any person claiming to be an employee of a business and to call the company if there is any question. If you are not satisfied, call law enforcement.
Ryan Thomas was arrested for burglary and being in possession of stolen goods. The District Attorney is also investigating possible elder abuse as a result of the victims age.