Every summer   pilots and aircraft that will be  involved in firefighting activity for the upcoming fire season converge on the Nevada County Airport  for an important safety meeting.    Cal Fire  Information officer  Lynn Tolmachoff says Cal Fire Air Attack 230 spotter plane,  and two Cal Fire Tankers #88 and #89,  are stationed at Nevada County Airport.  The rest flew  in for the special event today.

click to hear Lynn Tolmachoff
Tolmachoff says they get together because they could all be on the same incident at one time and they want to share frequencies to be able to communicate with each other and have an understanding of how each agency and their equipment works. 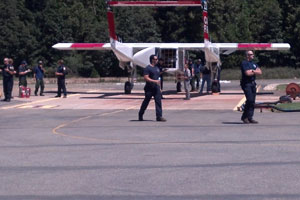 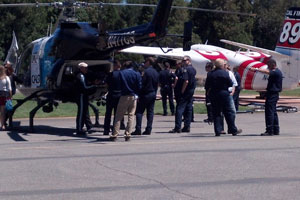 click to hear Battalion Chief Turner
Joe Satrapa who’s nickname is “Hoser” was a fighter pilot in the Navy for 28 years,  and this is his 22nd year flying out of Grass Valley Air Attack.  He’s  assigned to  Cal Fire Tanker 89.

The retardant is kept in tanks at the east end of Nevada County Airport where Cal Fire air attack is based.  Satrapa says Tankers can land and take off in a matter of minutes.
click to hearJoe Satrapa
Cal Fire does not own the firefighting  aircraft.  They are leased from  DynaCorp International, a private contractor who also  hires and trains  the pilots.