Caltrans is mourning the loss of a worker who died while on his way to a Caltrans memorial for workers killed on the job.  Dean Patton of Grass Valley was killed yesterday morning in a motorcycle accident on Highway 99. 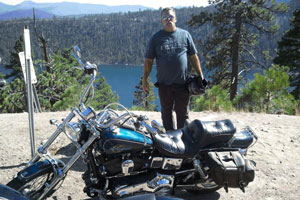 The CHP says he was with a group of motorcyclists heading to the state Capitol when an elderly woman turned in front of them and Patton didn’t have time to brake or take evasive action.  Patton had worked as a highway maintenance worker for Caltrans since 2006.  He was 50 years old. Caltrans Director Malcolm Dougherty said “My heart goes out to his wife, Trisha, children, and grandchildren. He was a good man and will be missed by all who worked with him and knew him. “

My condolences and prayers for his friends and family