Car Into a House in Nevada City

The vehicle continued down Broad towards the overpass and crossed over into an oncoming traffic lane and caught the officers attention for reckless driving and potential DUI behavior. The officers continued following the vehicle down towards Boulder Street, and the vehicle went through the stop sign at Sacramento and Boulder. At that point, the officers activated their emergency lights and attempted to make a traffic stop.

When the van reached the Y where Boulder Street veers off to the left and Red Dog Road veers off the the right, the driver missed both roads and went straight.

The Driver of the Van, 24 year old Mikyla Schober had to be extricated from the vehicle and was flown by air ambulance to Sutter Roseville trauma Center. A male passenger in the van was also injured and taken to the hospital. The woman living in the house was on the phone at the  time. She was shaken up but not injured. 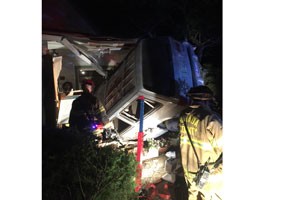