Celebrating Those Who Served

Over a hundred people gathered at the Veterans Building in Grass Valley on Veterans Day to celebrate all of the people in all of the brancjhes of the militray that have served our county in times of war and in times of peace. American Legion Post 130 Comander Claude Hessel welcomed the crowd while explaining the difference between Veterans Day and Memorial Day.

Celebrations included presenting of the colors, an invocation, singing of inspirational songs, and a keynote presentation from retired Army Major Jim Taylor, Medal of Honor Recipient for service during Vietnam. Taylor spoke of those who served with him and under him.

Many of the soldiers fresh out of high school just seventeen years old. Taylor sharing stories of other’s heroics, not his own. Though, at times faced with the horrors and tragedy of war, Taylor said all his troops focused on commitment to country.

The retired officer also said he concerned about the youth of the country today saying they don’t seem to care. Following his talk, Taylor shared this message to the youth.

Ceremonies concluded with a three-gun volley and the playing of Taps; from there, a tri-tip lunch and Bloody Mary’s were served for veterans and Karaoke fun was had in the Bunker all afternoon. 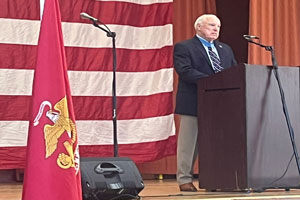 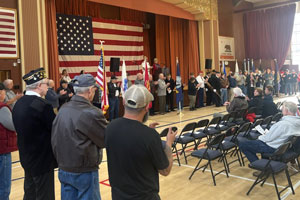