The 19th annual Barbara Schmidt Millar Celebration of Life Triathlon at Cascade Shores Sunday morning  is truly a celebration of life, love and hope. At the boat launch ramp area to Scotts Flat lake where the athletes set up their transition stations, 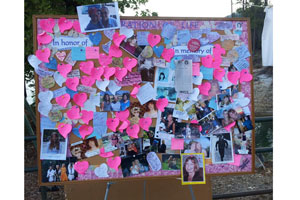 a board is posted filled with pictures and messages of those who have lost their lives to cancer and those who have survived it.  The messages are poignant and for Stuart Grimshaw who is here to cheer on his wife Keri Gevry, who is competing in the triathlon, that board says it all.
click to listen to Stuart Grimshaw

Athletes meet one another and do warm up exercises together in preparation for the swim that will start in  3 minute waves based on age.
click to listen to start of Triathlon 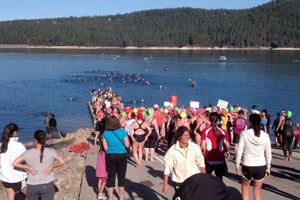 At the dock ready to watch her two daughters compete in the triathlon, Pat Henderson with 5 year old granddaughter Jasmine looks on. 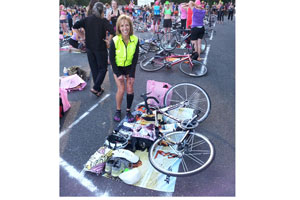 After the half mile swim participants do a quick change and prepare for an 11 mile bike ride. By now Stuart Grimshaw has set up a chair on the course to wait for his wife Keri Gevry to appear.

Volunteer, Wendy Reiley is separating spectators from the racers on their bicycles, some going as fast as 30 miles an hour down the hill to the changing station.
click to listen to Wendy Reiley

At this point 47 year old Michelle McIntosh appears to be leading although later she says her bike felt heavy towards the end of the biking part of the triathlon.
click to listen to Michelle McIntosh

At the finish line again it was Michelle McIntosh in the lead, a  sweet victory as she was coming off a serious neck injury that had sidelined here for the past 9 years, and she was doing the triathlon for the first time  with her 18 year old daughter, Josephine Falvey, who came in  third overall . 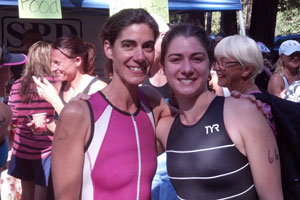 Michelle McIntosh’s winning time is 1 hour 12 minutes 7 seconds. She says she had a lot of people giving her motivation. 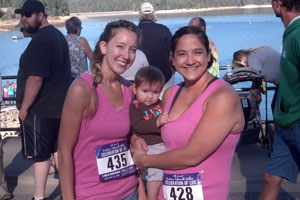 Hanna Miller does the 5K walk with her 8 month old baby Madelyn and friend Lacey, who’s mother Meredith Odekirk is in a battle with cancer. 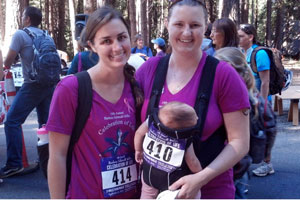 This is the 7th year of doing the 5K walk run for Lauren Dowd, this year with 3 month old baby, Taylor.