Grass Valley wrapped up a weekend of cultural celebrations ranging from the Armed Forces Day Celebration, The Penn Valley Rodeo, and a dedication of one of Grass Valleys most recent mural displays. The painting covers the wall of the parking lot at the soon to open El Barrio Market on Neal Street. The mural depicts a Nisenan Woman singing to a hand-woven basket representing the Nisenan heritage of Nevada County. Artist Nikila Badua shared the inspiration for the mural.

The mural also containing elements representing the importance of water, the Black Oak tree, and use of the feathers of the flicker to cover the yes during a ceremony of inner reflection. Spokesperson for the former Nevada City Rancheria, tribal representative Shelly Covert, says the mural is a reminder of the struggles the tribe has fought as they try to regain official recognition by the United States Government. Covert announcing progress is being made- at least at the state level.

Covert saying the painting is both a reminder and an entry point to the discussion about recognition of the tribe that was removed from the registry of Indian tribes in 1964.

Covert has been leading the charge for the 144 surviving family members of the Rancheria and local Nisenan with the ultimate goal being reinstatement and official recognition allowing tribal members access to government resources and assistance. 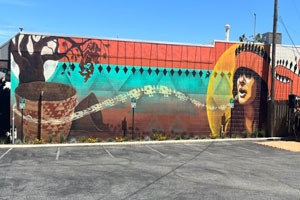