Cheryl Noble has been unanimously appointed station manager by Nevada County Digital Media Center/NCTV’s board of directors. Noble has a 20-year background in public relations and has been a producer of many broadcast programs aired on NCTV. Noble is part of the new board that began leading NCTV last October.  (11, 2013.)

According to Keith Davies, board president, the appointment comes with the station undergoing several transformations including digital streaming and a move to downtown Grass Valley. “Cheryl’s contributions to the board demonstrated she was uniquely qualified to lead NCTV’s relocation and technological transitions,” Davies stated.

Noble, who lives in Nevada City, is well known in the community as the 4th of July parade announcer and for her philanthropy. Five years ago she started the community book swap, a free, monthly event to exchange used books, music, movies and magazines. The book swap meets the first Sunday of every month, including holidays, at the Banner Grange on McCourtney Road.

In the five years as a producer, Noble has received seven WAVE (Western Access Video Excellence) awards from the Alliance for Community Media/Western Region. Her Café Community show, in which she produced and hosted, won Best Talk Show in 2010. She also produced and hosted Sierra Snapshots, a guided traveling program around Nevada County. Currently, she co-produces the Chamber Fireside Chat and the Food and Farm Show with long-time producer Gil Dominguez.

NCTV will relocate from the Nevada City Tech Center to 134 E. Main Street in downtown Grass Valley beginning mid-January. The central location will improve accessibility for the public.

“This year marks NCTV’s 20th year of broadcasting local programming,” Noble said. “One of our goals is to attract producers so our valuable community asset can continue capturing our interests for another 20 years.”

NCTV broadcasts on Comcast channel 11 and on Suddenlink channel 16. Government meetings are broadcasted on channel 17 for Comcast and Suddenlink. Programs can also be seen on the station’s website at www.nevadacountytv.org. 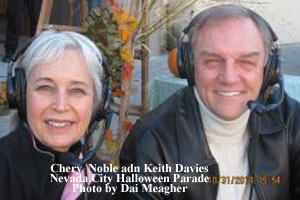