At the May 14th  board of supervisors meeting Supervisor Nate Beason presented a certificate of recognition to representatives of the Chicago Park community in honor of their 125 years of history. The full text of the certificate is below.

The Nevada County Board of Supervisors takes great pleasure in recognizing the community of Chicago Park as it celebrates 125 years of history. 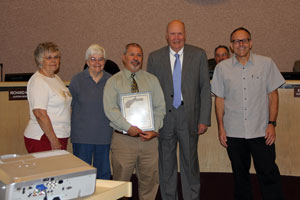 Chicago Park was originally settled by first-generation Italian Americans from Chicago, Illinois. According to oral history, they were land promoters and a real estate firm who sold lots intended for development and acreage for orchards. Many German-Americans settled in the area to farm. The original townsite was described as having “some of the very best land to be found anywhere in the foothills of California”, not likely to be disputed by residents or visitors today.

The rural and bucolic community, home of the Donner Fruit Trail, is known for its pastoral ranches, rich soil and bountiful produce, including renowned pears, apples, peaches, and Italian wine grapes.

In February of 1888, residents from the area sent a petition to the federal government to establish a post office. Shortly thereafter, a man by the name of Joseph Hubacheck arrived from Chicago to be the postmaster.

On March 24, 1888, the Post Office Department established a post office on the line of the Narrow Gauge Railroad at Chicago Park. Over the years the post office moved with the station to various locations, until it came to the Chicago Park Store in 1915. It remained in the store until it moved into its present location, built solely as a Post Office in 1987 and dedicated in 1988.

The Nevada County Board of Supervisors congratulates the Chicago Park community on its 125th anniversary, and wishes the residents many happy, bountiful years in this beautiful hamlet.