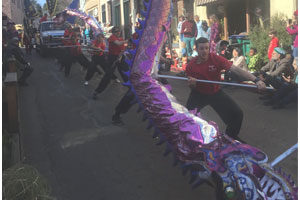 It was a sunny celebration as the Chinese New Year parade took place Sunday in Nevada City.
The parade traveled down Commercial Street which includes the original Chinese area of Nevada City. Community Asian Theater of the Sierra Executive Director, Jeannie Wood, introduced the leaders of the parade as they came down the hill.

Listen to a Grandmother

Tom Taylor, a CATS set designer, was the Grand Marshal and joked about why he was selected.

A large crowd lined both sides of the street as the drummers, dragons and lion dancers made there way to the Three Forks Brewery Parking lot. Three young boys enjoyed the dancers but thought they were a bit different.

Listen to the children

Following the parade, the Year of the Dog celebration continued with more performances, food and vendors.